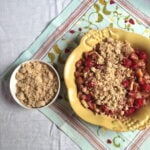 Here’s a dessert that’s sweet and a little tart at the same time! Raspberry Rhubarb Crisp is perfect with whipped cream or ice cream served alongside.

Rice Pudding with Rhubarb:  Elegant and so delicious, this one scented with rose water..

If you love fruit desserts like this, try my Summer Fruit Crisp too!

If you’ve made Raspberry Rhubarb Crisp, or any recipe on Studio Delicious, leave a recipe rating and tell me all about it in the comments below! 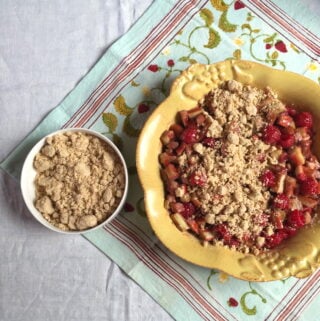 I did not come from a rhubarb family.

Apparently nobody in our house liked it, but really, we just didn’t know how to use it.

Rhubarb came with a general fear of sliminess, in an okra kind of way

My old friend Bonnie turned me on to the wonders of baking with fresh rhubarb. We worked together when I was in my early 20’s, and while I wasn’t a terrible cook, I didn’t know how to do much back then.

She was from a small town in the mid-west and was old-school, so when she served you a salad, it came with a chilled fork.

But it was her rhubarb vanilla cake I remember most. It was unlike anything I’d ever tasted-  sweet and tart at the same time.  I don’t know exactly how she made it, but the rhubarb was cut in small pieces mixed with sugar to make a syrupy sauce and placed in the bottom of a glass dish.

Yellow cake batter from a mix was then spooned over the top. It came out of the oven glorious and rosy and golden and was served with cold whipped cream.

It’d make you slap your Grandma – a phrase that exactly no one said where I grew up in Nevada.

After eating that cake, I decided I loved rhubarb.

Over the years Bonnie taught me about canning and preserving, which I still do every summer.

Sometimes we made fresh juice from the Concord grapes growing wild in her small yard. After a lot of squeezing, squishing, straining and draining and boiling, the juice was done – deep purple with a rare, sweet taste.

It was fabulous and refreshing, poured in a tall glass over crushed ice on those hot afternoons sitting on her front porch.

This was in the olden days, before every household had a juicer.

This raspberry rhubarb crisp has a light, buttery topping, that would probably even taste good on dirt. It’s that good.

Adding fresh raspberries to the mix is unexpected and tasty.

Rhubarb is totally worth a try  – and makes a satisfying spring dessert.

Get fresh recipes every week

Please rate this recipe and thanks for leaving a comment! Cancel reply

Hi, I'm Paige! Welcome to Studio Delicious, where the focus is fresh and interesting home cooking!