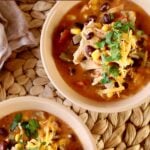 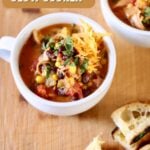 Why You’ll Love This Recipe

Few things are more welcome that a hot bowl of homemade soup. Especially one that’s been bubbling away in the slow cooker, ready and willing right when you need it.

Here’s a few good reasons to try it:

For the full recipe and list of ingredients, please scroll down to the recipe card below.

2. A boring but necessary photo of how the soup looks fully assembled and uncooked. The raw chicken breasts are nestled in the middle of the slow cooker.

3. When the cooking time is nearly done, pull the chicken breasts out with tongs and shred with two forks (it’ll be very tender and juicy). Then add it back in the soup along with cubed cream cheese.

Let the soup simmer a little while longer to break up and melt the cream cheese – this can take a few minutes and it may look curdled at first, but don’t worry – it’s just not melted. Serve with fixings such as cheese, green onions and parsley.

What is the best way to store the soup?

Airtight containers with a well-fitted lid always work, but my favorite is a large glass canning jar with a lid. The soup can be refrigerated for up to 3 days.

Can I make this soup ahead of time?

Absolutely! Make it the day before you need it, that’s the beauty of a slow cooker.

If you’ve tried Creamy Chicken Enchilada Soup Slow Cooker, or any other recipe on Studio Delicious, please rate the recipe 5 stars and tell me how you liked it in comments below! 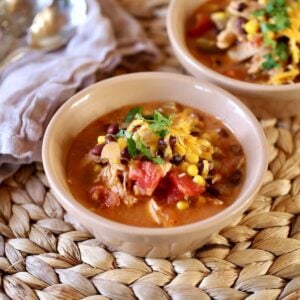 Get fresh recipes every week

Please rate this recipe and thanks for leaving a comment! Cancel reply

Hi, I'm Paige! Welcome to Studio Delicious, where the focus is fresh and interesting home cooking!